We got up at 6:00 am today and were on the road – fed and packed – by 7:10. We planned to see Joggins Cliffs fossil site, but before that we wanted to have a look at a nearby beach that had been recommended to us a couple of days ago by Karen at Maritime Mosaic.

That first beach was as good as advertised. Karen said that you could find trackways and fossils, shells and sea glass at the beach. We saw lots of fossils and took many photographs. We got there just before low tide, so the tide was still going out. There were lots of little snails all over the place and David, who wandered way out while I was poking along closer inshore, said he saw live clams, too.

I was walking along thinking “I’d really like to find a piece of sea glass,” when what to my wondering eyes should appear but… 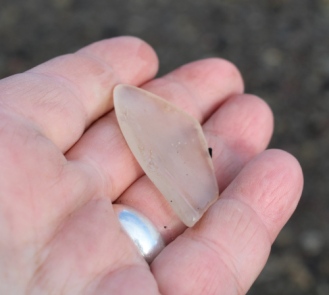 … and in no time, it seemed, I had nine pieces of sea glass, and one piece of sea ceramic.

Eventually David returned from the far reached of the Atlantic and we went over to the far end of the beach, where there were large, light-coloured slabs of rock. Here we found a trackway – it was pretty exciting to be able to identify one myself!

Then we went to the Joggins Cliffs museum – I can’t say enough about the small but incredibly well-organized and informative museum, or about the enthusiastic staff. We couldn’t get down to the beach because of the tide coming in, but we saw everything else. Before we left, we succumbed to the delicious-smelling and still-warm biscuits made by Joyce at the little coffee shop in the museum building. Dr Fox was into my biscuit as soon as it hit the table!

It was a long drive to our last visit of the day, Miguasha National Park. Again, a museum I can’t recommend too highly. The big thing at Miguasha is fish, and the fish are amazing. I really, really wanted a T-shirt, and I’ve had a hard time finding one in my size. Linda at the admission desk found one for me with one of the fish on it – Dr Fox was so happy that he wanted a picture with Linda as well.

Behind Linda on the wall is one of the fish for which Miguashi is famous, Eusthenopteron foordi.

David had a quite unexpected adventure in which he thwarted a pair of fossil thieves and rescued a valuable specimen. But I need to go to bed now, because we have another long day tomorrow, driving around the Gaspe Peninsula and sticking our feet in the Atlantic again!